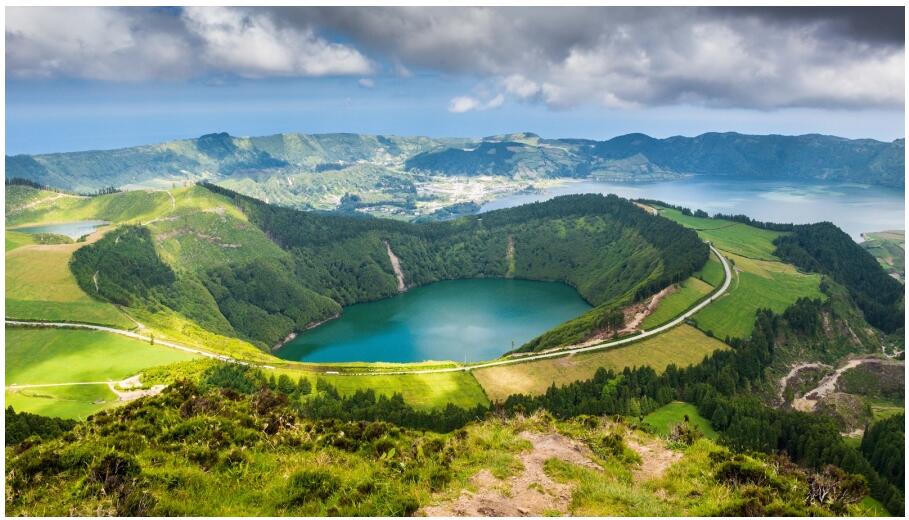 The people of the Azores are not exactly happy when it is said of their islands that they are “at the end of the world”. The inhabitants of the energetic archipelago see it completely differently. For them, this region is something very special, even if their national home is distant Portugal.

They proudly point out that the Azores have the largest mountain in Portugal. And the 2,351 meter high Sao Jorge is not just any rocky giant – it is a picture book volcano as a product of a primal nature. Even far from the continents, the earth once raged and created impressive islands. It is a quiet world between Europe and America, and when the islanders look to the west at the Atlantic, they see four thousand kilometers of the sea.

Many a visitor is amazed, because nature has given the people who live here wonderful landscapes on this island in the vastness of the ocean. With craters, floating islets, a paradise for hikers and climbers and fertile valleys.

In the following we present you the most exciting tours, most beautiful attractions and best sights in the Azores. 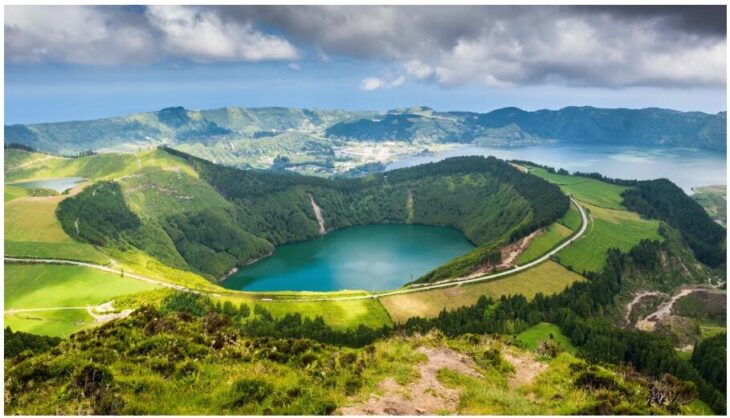 It is the height differences that shape the landscape on the sparsely populated island of Flores. It is a fragile world for hikers, because some of them have broken into the moss that looks like a sponge off the path. So you shouldn’t leave the hiking routes on this wonderful island.

No less than two dozen waterfalls rush into the valleys on Flores and seven crater lakes also indicate the volcanic origin. This is the Eldorado for people who cannot be stopped even in wind and weather and for whom trekking is anything but a foreign word. Flores rightly bears this name, because hydrangeas and roses bloom everywhere here.

Baroque trains carry some of the old houses in the capital, Ponta Delgada. 65,000 people live here and in the university town most of the residents see their “gateway to the world”. On the threshold of the 16th century, today’s metropolis of the Azores was founded as a fishing village called Sao José. But the “harvest” from the sea did not make the inhabitants rich.

This changed in the 19th century when the archipelago became a hub for citrus fruits. During this time, a number of villas were built that heralded the fresh prosperity and survived the time. Today the Avenida Infante Dom Henrique is the meeting point of the locals and one of the most beautiful sights of the Azores. Also ideal for long strolls. The city’s landmark is the photogenic Portas da Cidade.

One of the greatest attractions on the island of Sao Miguel is a blooming paradise – the Terra Nostra Park. The former American consul Thomas Hickling made a contribution to this complex when he chose Sao Miguel as the seat of his summer residence in 1780. Much later, the park became a kind of playground for imaginative botanists from England and Portugal.

Terra Nostra changed its face more and more and was supplemented by bodies of water and large flower beds. Yankee Hall, the former residence of the consul, has become a hotel and there is now a thermal bath in the middle of the complex. Terra Nostra has earned the reputation of being one of the most impressive gardens in the world.

The picturesque Lagoa de Fogo on the island of Sao Miguel is framed by volcanic mountains. The lake is at a height of six hundred meters above sea level and is one of the most photographed and visited sights in the Azores. The water appears in its most beautiful shine, especially in the early afternoon.

The so-called “lake of fire” was created after the eruption of the Pico da Sapatena volcano in 1563. The region around the crater lake is under strict nature protection, as this is the breeding area of ​​numerous rare birds. The Lagoa de Fogo is particularly popular with hikers.

The Azores were of strategic importance for passages to America and Brazil in the Middle Ages. Here, on the long voyage, water was refueled and food was taken. This also led to a certain prosperity for the inhabitants of this “fortress” in the sea. Angra do Horoismo was the capital of the archipelago in those times.

The Italian military architect Benedetto designed the Castelo de Sao Baptista in 1567. This is where the treasures that the Portuguese conquerors kidnapped from Central America were reloaded. The mighty fortress is well preserved and is worth a long tour. 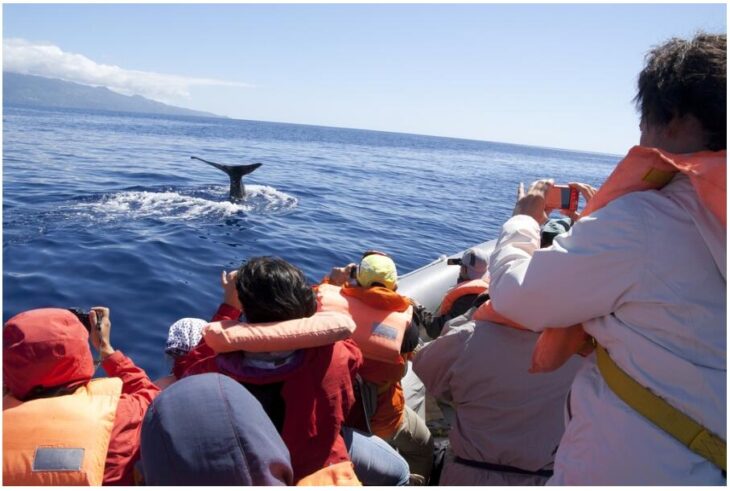 Hikes on Pico Alto, the highest point in Portugal, are one of the highlights of a stay in the Azores for many. Not only a hiking trail but also a road leads to the summit, which is often shrouded in clouds.

If you want to go up to a height of 2,351 meters on foot, you will pass extensive forests with blueberry trees and Japanese sickle firs on the ascent before reaching a plateau. The view from the summit plateau is terrific. Even grapevines thrive on the slopes of Pico.

This is a pitch black cave that was created by the eruption of the Pico do Carvao volcano around two thousand years ago. The so-called “coal grotto” can be found on the island of Terceira and is around a hundred meters deep. When the volcano erupted, part of the glowing magma flowed back into the chimney.

It froze into drops and stalactites on the walls. A visit to the cave is also suitable for families with their children and the light in the tunnel at lunchtime is a special experience. Then the rays of the sun compose a magnificent spectacle with the mosses and lichen on the walls.

Around five thousand people live on this small island in the Azores and they are apparently very religious. Because they never miss an opportunity to celebrate festivals with a Christian background. Graciosa can only be reached by ship or plane from Terceira.

The island is also famous for its hearty fish stew, which is served there in a restaurant above the port of Folga and which is called “Caldeirada”.

The Furnas hot springs are one of the greatest attractions in the Azores. Centuries ago the sulphurous water was said to have a healing effect. Wealthy farmers settled on this island in the 18th century and their mansions still bear witness to a certain degree of prosperity.

Furnas benefits from its sheltered location in the shade of the lava rocks and presents itself in the summer months with a variety of Mediterranean plants. At the eastern end of the valley there are a total of 22 hot springs, the so-called fumaroles. Applications are offered in the Kurmittelhaus. They are said to help against rheumatism, bronchitis and skin diseases.

The Sete Cidades, the “Lake of the Seven Cities”, is a water-filled crater of a volcano on Sao Miguel. Numerous legends surround the idyllic lake, which is characterized by a special feature – it is divided into two parts.

The northern part is called Lagoa Azul and actually shimmers in a bluish color under the rays of the sun, while Lagoa Verde is more blessed with greenish tides. Some hiking trails have been laid out on the shores of the lake, leading to the Vista do Rei viewpoint, among others. 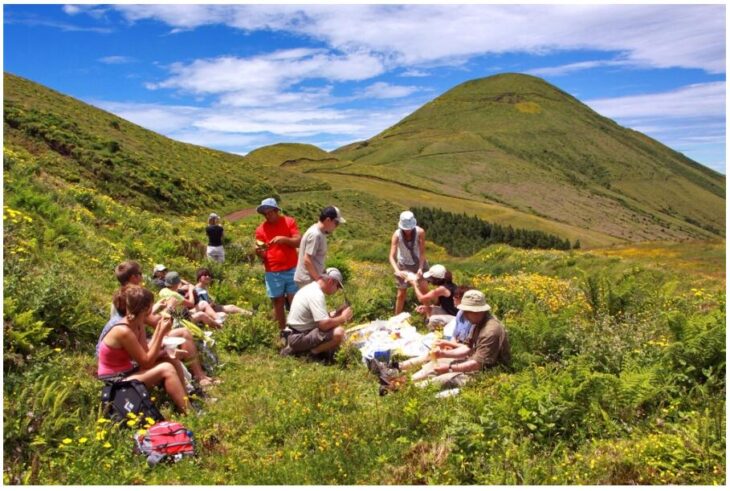