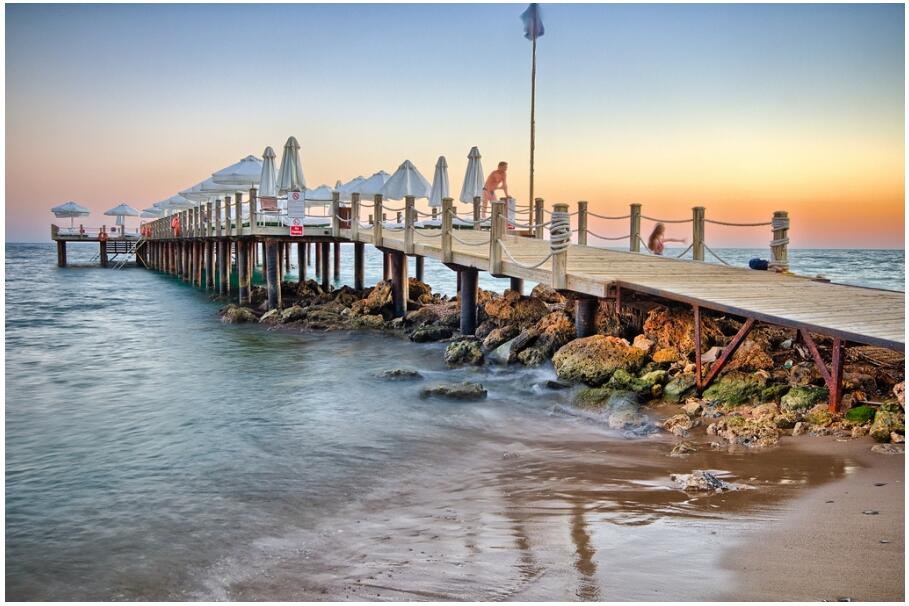 The Turkish Riviera is the name given to the southern Mediterranean coast of Turkey between the resorts of Kemer in the west and Alanya in the east. The destination airport for this wonderful travel destination is usually Antalya. Other important vacation spots are Belek and Side.

The area is particularly popular with travelers because of its beautiful sandy beaches and the wonderful nature with the Taurus Mountains in the hinterland. With its varied landscape and thousands of years of history, the Turkish Riviera is much too good for a pure beach holiday.

In the following we present you the most exciting tours, the most beautiful attractions and the best sights on the Turkish Riviera. 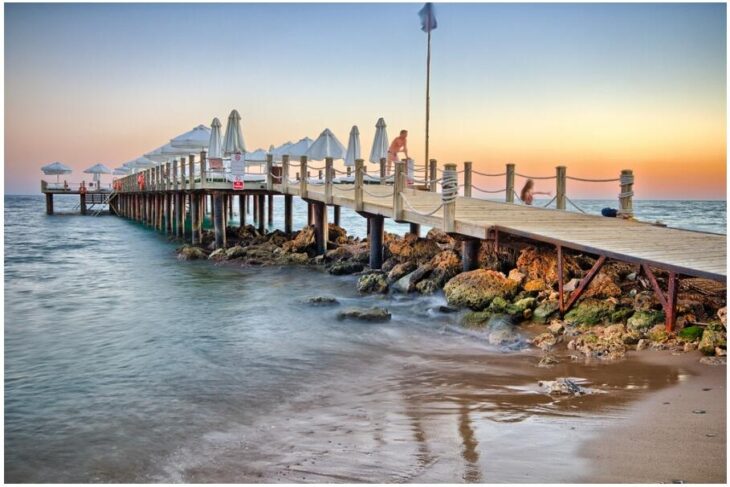 Many holidaymakers only connect the largest city on the Turkish Riviera to the airport for their outward and return flights, while Antalya has a history of more than 2000 years and offers an extremely interesting old town, in which Greeks, Romans and Ottomans have left their mark. A walk through the winding streets of the harbor with the many small souvenir shops and taverns is a must if you are spending your vacation on the Turkish Riviera.

Hadrian’s Gate and the Alaeddin Mosque with the city’s landmark, the 38 m high fluted minaret, should not be missing on any sightseeing program. The city’s archaeological museum is one of the leading museums in the country and impresses with exhibits from the Stone Age to the Ottoman Age. Particularly interesting are the gallery of the gods from the excavation site of Perge, several colorful mosaics and the gold treasure of the Byzantines.

Alanya, one of the most popular seaside resorts on the Turkish Riviera, is enthroned by the Seljuk fortress, visible from afar, which was built on a rocky outcrop at a height of 250 m. It is considered one of the most important medieval castle complexes in the entire area and resembles an ancient city with marketplaces, houses and more than 400 cisterns.

The impressive city wall from the Hellenistic period consists of resistant stone and lime walls and has a length of 6.5 km. No vacationer should miss a visit to the vast complex with its 140 towers, the Inner, Middle and Outer Fortress.

The area around Side is very rich in water and several waterfalls are wonderful excursion destinations during a stay on the Turkish Riviera, especially on hot days. The most popular waterfalls are the Manavgat Falls, which are just 8 kilometers outside the city. As this is one of the most important attractions in the area, thousands of tourists come every day during the high season.

At least as impressive but less well known are the Kursunlu Falls, which are located in a beautiful nature reserve, and the Düden Selalesi waterfalls. Here you can even hike through a vault directly behind the waterfalls. Depending on the season, the amounts of water are very different. The falls are usually most impressive in spring and early summer.

The amphitheater of Aspendos was probably built in the 2nd century AD and is considered the best preserved Roman amphitheater in the world. The imposing stage has been completely preserved and the acoustics are still unique today. Aspendos is located around 50 kilometers east of Antalya and can be reached on well-developed roads.

A few years ago, the ancient theater, which could seat up to 20,000 spectators, was regularly used for opera performances and concerts. Unfortunately, this is no longer possible today for monument protection reasons. The archaeological site of Aspendos City with numerous houses, an acropolis and ruins of the aqueduct is worthwhile for travelers interested in history.

5. Roman field of ruins from Side

The remnants of the ancient city of Side are one of the most interesting sights on the Turkish Riviera. The field of ruins is located in today’s Selimiye district and was largely overbuilt by the new city. The excavation work is still going on today. You can see many buildings from different eras. These include an amphitheater for 20,000 spectators, the Temple of Apollo and the great Imperial Agora. Anyone who spends their vacation on the Turkish Riviera should definitely make a detour here. 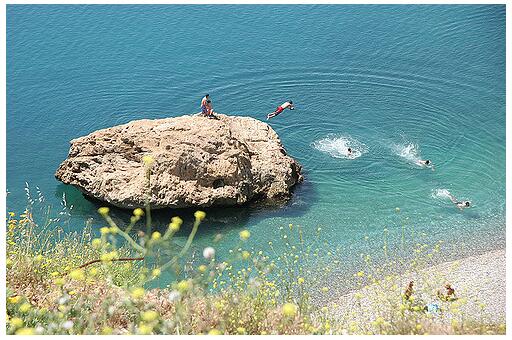 Ancient Myra was located where the city of Demre is today and has only been exposed bit by bit by the mud of the river of the same name since the 1960s, which had covered the important ruins for several centuries. The fascinating rock graves, which were carved into the rocks of the mountain like little houses, are among the highlights of this excavation site.

The most famous inhabitant of Myra was the holy bishop Nicholas, whose Church of the Holy Sepulcher can also be visited and which is one of the most visited sights in Myra. He is known as St. Nicholas, Santa Claus or Father Frost. The archaeological excavation sites even inspire cultural banauss because of their beauty.

7. Excursion to the Taurus Mountains

During a vacation on the Turkish Riviera, an excursion to the mighty Taurus Mountains with their up to 3000 m high mountains is definitely recommended. Many locals “flee” to the idyllic villages during the hottest season and enjoy the significantly cooler temperatures there. Hikers and nature lovers get their money’s worth in the Taurus Mountains. Various well-organized hiking trails cross the area and offer experiences away from mass tourism.

Near the town of Kemer is the most famous mountain in the region, the 2365 m high Tahtali Dagi. If you want a breathtaking view of the landscape and the coast, you can take the cable car, which opened in 2006, to the top. A very special experience is a canoe or kayak trip on the Köprülü Kanyon in the Manavgat National Park of the same name. The river has dug its way 400 m deep into the mountains over a length of around 14 km. A terrific natural spectacle!

The archaeological site of Perge is located around 16 km from Antalya in an extensive inland plain. Whoever visits it gets a good impression of the appearance of a Roman city. There are various city gates, houses, streets, baths, an old market square and a necropolis.

This ancient theater also has a very elaborate stage building and testifies to the craftsmanship of the time. For many visitors, a trip to this sight on the Turkish Riviera is one of the highlights of their trip. The Roman theater and the old stadium are particularly beautiful.

Kekova is a small island with an area of ​​5.7 km², which is only around 500 m from the village of Üꞔagiz and can be reached by a short boat ride from the mainland. Today the island is uninhabited and is under nature protection. It is known for its underwater ruins on the north side.

The ancient city of Dolichiste sank due to several earthquakes, probably in the 10th century and was completely flooded. The clear water allows a good view of the foundations and remains of the building, which look like something from a mysterious world. The sunken city of Kekova is a wonderful getaway for the whole family.

The magical Dim Cave with its small 17 meter deep lake is the second largest cave open to the public in all of Turkey. It is located about 12 km east of Alanya and impresses with its four galleries and the huge stalagmites and stalactites.

The age of the stalactite cave, which is entered via stairs, is estimated to be over a million years. A trip here is a pleasure for adults and children alike and makes the Dim Cave one of the most beautiful sights on the Turkish Riviera. 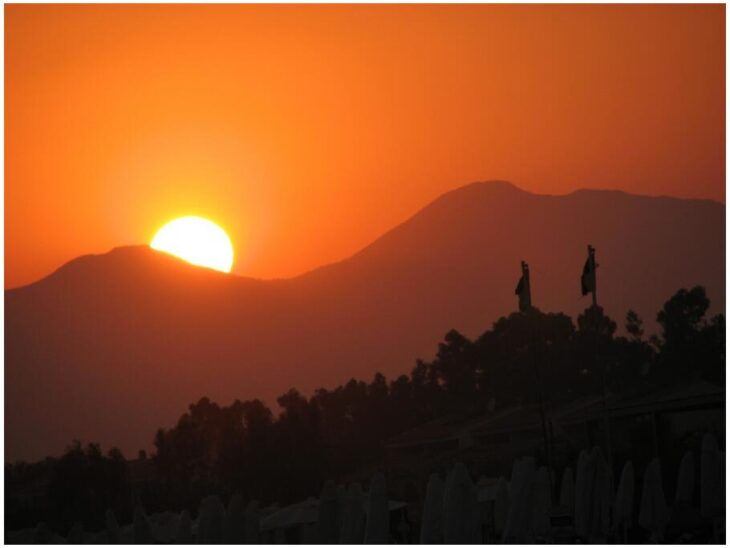