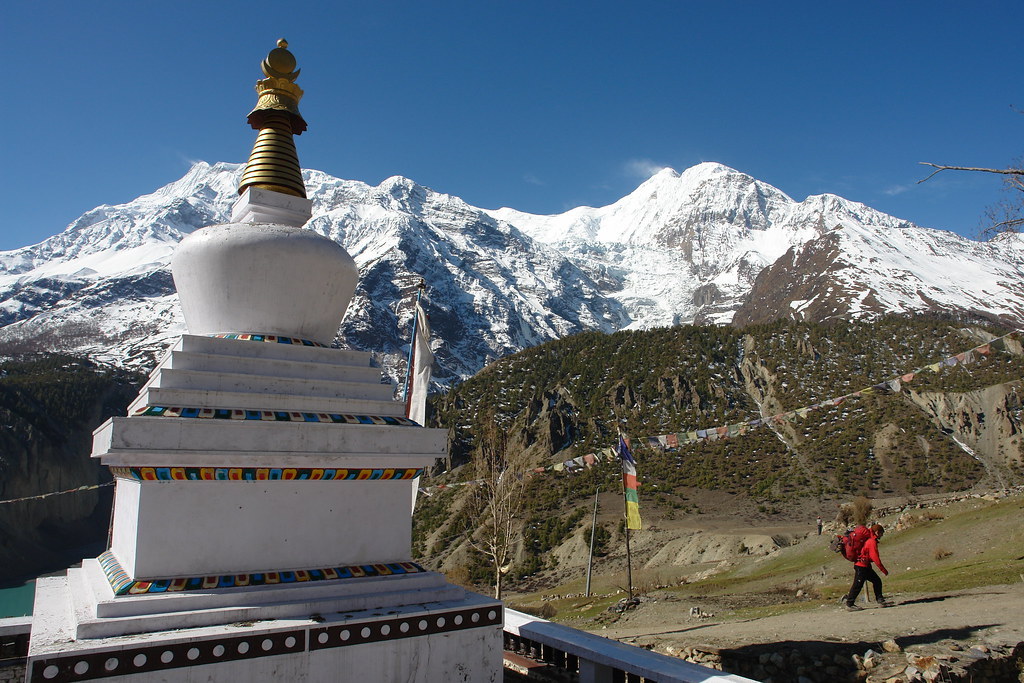 Nepal is a country located in Asia with name that begins with letter N. The democratic Federal Republic of Nepal is located in South Asia and borders Tibet (China) in the north and India in the west, south and east. A large part of the Himalayas lies in the north and east of the country. With Mount Everest, the highest point on earth is on Nepalese soil (8,848 m) and with it a total of seven of the ten highest mountains in the world.

Approx. 30 million people live in the country, which can be roughly divided into three regions: 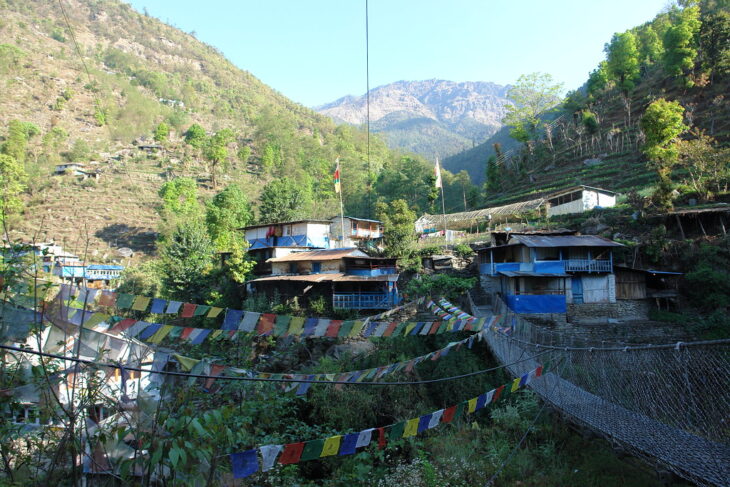 For Nepal, a passport that is still valid for at least 6 months (from the day of departure) and a visa are required. The visa is conveniently available upon entry.

Due to the extreme height differences within Nepal, there are a large number of climatic zones. In the regions of Dolpo and Mustang, summer is a very good time to travel because the main Himalayan ridge keeps the monsoons off. The best travel time for higher altitude trekking in Nepal south of the main Himalayan ridge is before the monsoon between March and April and after the monsoon at the beginning of the dry season in October and November. The months of December, January and February are ideal for exploring the culture in the Kathmandu Valley and Pokhara and hiking in the promising Himalayan foothills. In the mountains, different temperatures and weather conditions must be expected at all times.

The water from the pipes is not suitable for drinking. Please only drink water from purchased bottles, boiled or filtered water!

The Nepalese national dish is Daal Bhaat: rice with a seasoned lentil sauce and curry vegetables. It is often served with saag (chard), pickles and papadam (a thin, deep-fried flatbread made from lentil flour).

There are no mandatory vaccination requirements for entering Nepal. Please clarify with your doctor in good time which vaccinations are necessary for you.

A personal pharmacy with your own medicines is strongly recommended; it makes it easier to act in the event of illness.

Altitude: When traveling in high mountain regions, an adjustment to the altitude must be made. We ask you to read our recommendations for a successful adaptation to great heights in the travel documents carefully before starting your journey.

Attention also when dealing with the sun: The UV rays are much stronger than ours due to the altitude. Sunscreen with a high sun protection factor and headgear are mandatory.

Malaria: When visiting Chitwan National Park, it is recommended that you take steps to prevent malaria and protect yourself from mosquito bites with clothing, repellents and the use of mosquito nets. The regions around Kathmandu and Pokhara as well as mountain regions from 1,200 m are considered to be free of malaria.

In the summer months at lower altitudes, light cotton clothing is most comfortable to wear. In the winter months we recommend light clothing during the day and warmer to warm clothing in the evening and morning. Attention: At over 4,000 m it can be very cold all year round! Decent clothing is appropriate when visiting temples and religious sites.

You can travel to Nepal almost all year round, because the different regions and altitudes offer very different climatic zones. The climate of Nepal is strongly influenced by the monsoons. From around mid-June to mid-September there are short but heavy rain showers almost every day in the regions south of the Himalayas. Most of the precipitation often falls in August. Due to the extreme differences in altitude within Nepal there is a multitude of climatic zones. The question of “what is the weather like in Nepal in November” can therefore not be answered universally. Where in Nepal is the whole point.

Regions south of the Himalayas: The best travel time for higher altitude trekking in Nepal south of the main Himalayan ridge is before the monsoon between February and April and after the monsoon at the beginning of the dry season in October and November. In spring the temperatures are usually pleasant and many wildflowers and entire rhododendron forests are in full bloom – in autumn it is interesting to watch the harvest being brought in.

The months of December and January are ideal for exploring the culture in the Kathmandu valley and Pokhara and the wonderful hikes in the promising Himalayan foothills, as well as getting to know the people of the country better or visiting the Royal Chitwan National Park. The daytime temperatures are pleasant when the sky is often cloudless. At night, however, especially in higher regions, it can get very cold. The higher passes are often snow-covered in winter and are therefore impassable. In the regions around Kathmandu and Pokhara, the climate is warm almost all year round, with moderate temperatures in winter.

No matter what trekking and what time of year, in the mountains you have to reckon with different temperatures and weather conditions at all times. It is not uncommon to experience all four seasons in a single day. The sun is particularly intense in the mountains and should not be underestimated even with cool temperatures, wind or hazy weather in the lower elevations. Without sun protection and headgear, you can quickly get sunburn or, in the worst case, even sunstroke. It can get very cold at night and early in the morning. A warm sleeping bag, a down jacket / anorak, a warm hood and gloves are required on every trekking and hiking tour!

Climate change does not stop at Nepal either. This makes it very difficult to predict expected weather and temperatures. “The best travel time with guaranteed good weather” for a certain route does not exist (anymore).

The local currency is the Nepalese rupee. The import and export of the local currency is not permitted. Change is therefore in Nepal. We do not recommend changing money directly at the airport in Kathmandu. Here you often get worse exchange rates than at the banks or exchange offices in the city. Our guides are happy to show guests where it is best to change. In Nepal, the euro is very popular for exchanging rupees.

An ATM card can be used to withdraw money in Kathmandu, Pokhara and most other major cities. Most ATMs are limited to max. 3,500 rupees limited. Expect higher fees when using credit cards. Please inquire with the relevant bank or credit card company or have your debit card activated before you travel.

In Nepal there are frequent power outages (sometimes even 8-10 hours a day). So please take enough cash with you or think about withdrawing money in good time.

In many places giving tips is part of it – this is also the case in Nepal. Tipping is highly valued in the Nepalese culture and is a symbolic recognition for the service rendered. An average service calls for an average tip, adjustments up or down reflect the (un) satisfaction of the guests.

The mains voltage in Nepal is 220 volts. As a rule, there are sockets for three-point plugs in the accommodations. Our two-pin plugs also fit into the sockets, but usually sit quite loosely (regardless of whether with or without an adapter).

On December 5, 2013, all Nepalese airlines were blacklisted by the EU Commission “DG for Mobility and Transport”.

The background for this measure is a planned connection of the airline Nepal Airlines to Europe. The security of the airlines themselves in Nepal has remained unchanged for many years. It has not deteriorated in the past time.

The civil aviation authorities of the EU Member States can only inspect aircraft operated by air carriers that fly to airports within the EU. For Nepalese airlines that do not fly to the EU area, the EU Commission depends on the cooperation of the Nepalese authorities.
Airlines that are not or not sufficiently controlled by the competent foreign authorities in the eyes of the EU Commission are also on the black list of airlines. Since in the case of Nepal all airlines were blacklisted at once, it is reasonable to assume that this has official reasons and is not necessarily related to the safety of the individual airlines themselves. 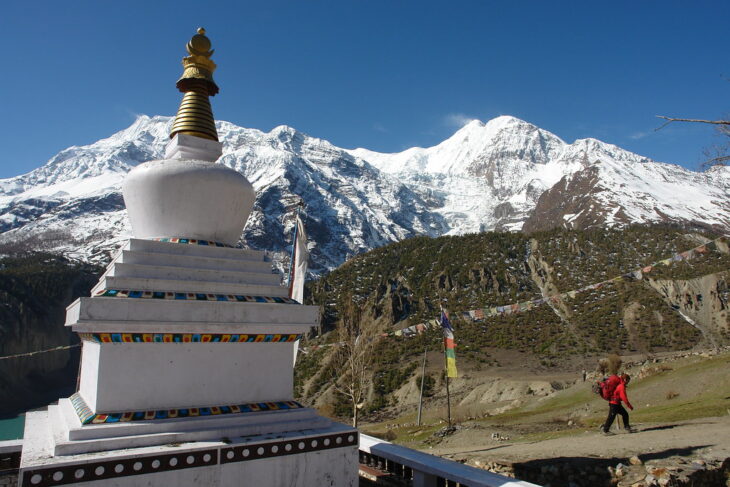